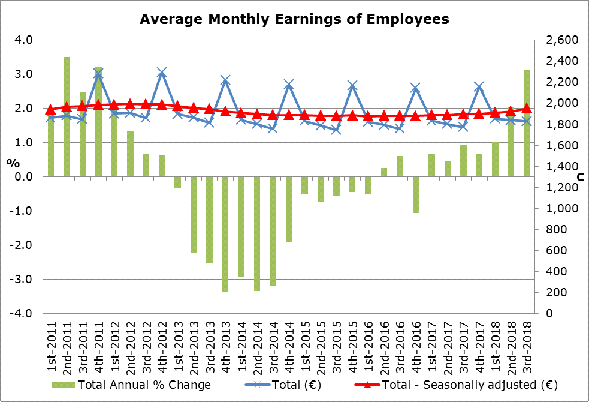 Note: From the 1st quarter of 2018 data are provisional.

Average monthly earnings of employees include the basic salary, the cost of living allowance, earnings for overtime, the Holiday Fund, any other allowances received by employees during the reference period and payments in arrears. The average is calculated by dividing the total gross earnings before any deductions for compulsory social security contributions, by the total number of employees who received remuneration.

The Percentage Change - Compared to the same quarter of the previous year is the percentage change of average monthly earnings, comparing data of a specific quarter, with the corresponding quarter of the previous year. The comparison is made between corresponding time periods of different years. Therefore, there is no need to use the seasonally adjusted data, since the seasonal component is the same for the two periods.

The data used for the calculation of the average monthly earnings, include data for all employees for whom social security contributions have been paid by the employer.

Data cover all sectors of the Economy of Cyprus, excluding the activities of private households.

The data source is the records of the Social Insurance Services. The results are published on a quarterly basis.