9 August 2019 – Today, the Greek Cypriot leader, Mr. Nicos Anastasiades, and the Turkish Cypriot leader, Mr. Mustafa Akıncı, met at the Chief of Mission’s residence in the United Nations Protected Area under the auspices of Special Representative/Deputy Special Adviser to the Secretary-General on Cyprus, Ms Elizabeth Spehar.

The two leaders had a sincere and constructive exchange of views and they discussed in depth the basic principles. They decided to continue engaging in the efforts undertaken by Ms Jane Holl Lute with the determination to finalize the Terms of Reference that would enable structured and results-oriented negotiations leading to a settlement with a sense of urgency.

The two leaders also decided to announce their readiness to hold a tripartite meeting with the Secretary-General after the United Nations General Assembly in order to plan the way forward.

The two leaders also reaffirmed their commitment to intensifying the work of the Technical Committees with the objective of improving the daily lives of all Cypriots and to implementing further confidence-building measures, with UN support. 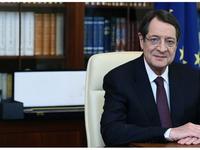