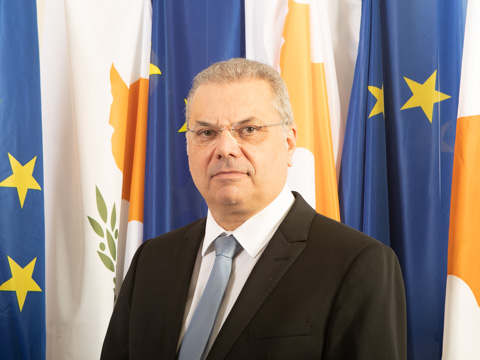 Address by the Minister of Interior, Mr Nicos Nouris, to the Monitoring Committees of the Home Affairs Funds 2014 - 2020 of the European Commission

It is with great pleasure that I am addressing for the first time as the Minister of Interior the Monitoring Committees of the Home Affairs Funds.

In a democracy, the institution of oversight and monitoring, when properly implemented and exercised, can only prove to be beneficial. I would like therefore to thank the European Funds Unit of the Ministry of Interior for having succeeded to transform these Committees into a forum for dialogue on migration issues that provides, through an exchange of views, the opportunity to solve problems and find solutions to manage migration challenges.

I am representing a country that has experienced first-hand what it is like to be a refugee. I, myself, also belong to the generation of refugees. As people, we are well aware of the pain of refugees. After all, we are still living this pain and, in fact, in the most violent way.

As people, we have learned to embrace the pain of our fellow citizens and to offer our help without asking anything in return. We have proved many times that the reserves of humanity of our suffering people are inexhaustible.

It is obvious, however, that today this is not what is at stake for migration. The boundaries between humanity and exploitation are unfortunately blurred.

It is clear that on the altar of profiteering, Cyprus is becoming a place for transaction of human souls.

The traffickers, taking advantage of human suffering, deceive migrants by advertising Cyprus as their opportunity to enter Europe. Most of those arriving in Cyprus aim to go to mainland Europe, but are unaware that our country is not a member of the Schengen area that will allow them to cross unchecked to other Member States.

As a result, our country becomes a place of gathering for thousands of migrants seeking international protection, even if their lives are not really threatened.  Because not all migrants left their homeland for the same reason. The 78% of those who arrive in our country today and apply for asylum are not refugees, but people coming from “safe countries”.

The huge flows of migrants arriving on our island are far greater than its size. We constantly warn our European partners that the situation unfolding in our country exceeds both our limits and capabilities, thus preventing the proper management of these flows as well as the effective and methodical implementation of actions for the integration of third-country nationals into our society.

The numbers are relentless for Cyprus both in terms of population and the demographic impact on our semi-occupied homeland.

The numbers are unquestionable. In 2019, we had almost 17,000 asylum applications, representing an increase of more than 500% compared to 2015. Today, in our country, asylum applicants and persons who have already been granted international protection status amount to more than 35,000, i.e. 3.8% of the population. To show the true size of this percentage, it suffices to say that if the same figures were applied in Germany, then the number of asylum seekers in that country would be 3.6 million.

The picture of flows and arrivals for 2020 is misleading for Cyprus. The figures for this year so far may indeed show a decrease in the number of applications; nevertheless, they do not justify any complacency, as these figures are temporary and are largely due to the pandemic restrictions as well as to the reduced arrivals in the occupied areas, mainly from Africa due to the suspension of air arrivals.

Already with the resumption of flights to the illegal airport of Tymbou, the arrivals of Africans have increased dramatically, many of whom are tested positive to coronavirus, thus worsening the already aggravated situation in the reception centres, where we are currently operating 11 overcrowded quarantine areas.

The Republic of Cyprus, recognising the severity, but much more the aggravation of the problem, has this year taken steps to diversify the methodology for the management of asylum seekers, treating refugees differently from economic migrants, but without any lessening of their human rights.

Our focus is even extended to prosecuting traffickers and ending the exploitation of human suffering and the abuse of the system that have unfortunately made our country a pole of attraction.

Within a few months, in cooperation with the European Asylum Support Office (EASO), we have strengthened our asylum service, established a list of safe countries, voted for significant changes of the Refugee and Migration Laws, made amendments to our Constitution through the House of Representatives, while the government has decisively strengthened with 10 judges the International Protection Administrative Court (IPAC).

Our aim is to speed up the asylum application examination procedure for those applicants who come from a country included in the list of “safe countries”, as the relevant European Directive of 2013 states. In addition, our aim is to examine an unfounded application within 10 days and then, if the applicant appeals to IPAC, the decision should be issued within a period not exceeding 25 days.

Only with such a mechanism will we be able to drastically reduce the manifestly unfounded applications and be able to provide real help, support and care to the real refugee migrants who need it.

Of extreme importance for our strategy is to increase the number of returns.

-       We must and will increase returns. Since the beginning of this year, and despite the pandemic measures, we were able to carry out 1,250 voluntary returns by migrants to their countries of origin with the FRONTEX co-financed programmes.

-       We have managed to end the phenomenon of fake students with the introduction from the current academic year of strict criteria in colleges of higher education. In the last three years alone, 2,500 third-country students applied for asylum, while

-       another 4,000 during the same period, also coming from colleges, engaged in fake marriages with European nationals in an effort to stay in the country. This problem of fake marriages ended 3 months ago following the voting by the House of Representatives of three Bills submitted by the Ministry of Interior and through which strict criteria and penalties were set.  It is noteworthy that, in investigating marriages for which there a clear suspicion of being fake, we have cancelled 836 residence permits, while the authorities are currently investigating another 1,200 cases.

-       The control of fake students and marriages is undoubtedly improving, but it does not solve the problem. Three out of four illegal immigrants still enter from the government-controlled areas of the Republic through the ceasefire line, coming from Turkey through our occupied territories. It is therefore crucial for our country to implement measures to prevent the illegal entry through the dividing line, without this in any way implying that these are our borders. We are demanding from the EU to recognise this possibility without giving Turkey any kind of political argument. After all, the Green Line Regulation not only allows, but imposes on the Republic of Cyprus to guard the line in order to prevent the illegal entry of any person into the European territory. And this is what we must do.

If what you have heard suggest the diagnosis of the problem, our efforts of treating and dealing with the problem is assisted by a series of actions by the European Commission itself.

I therefore feel the need to convey the Cyprus government’s gratitude through you, the representatives participating in this 5th Monitoring Committee.

A Committee that responded immediately to our call for further financial support, but also for the creation of a new framework of cooperation, in order to minimise the risks of exposing Cyprus to greater pressures.

It is worth mentioning that the support we receive at a financial level is largely covered through the utilisation of European resources, under the management supervision of the European Fund Unit of our Ministry.

I shall also note that, under the revised National Programme, which is expected to be approved by the European Commission soon, appropriations from European funds will be further increased to around €107 million. Of these, about 39 million relate to the Asylum, Migration and Integration Fund, 59 million to the Internal Security Fund - Borders and Visas Fund and 9 million to the Internal Security Fund - Police Cooperation.

If there is one thing which we should especially give credit to in the European Funds Unit, this is the rate of absorption of funds. Of the 136 projects we currently have, 86 have been completed.

I want to hope that by the end of the programming period, in 2022 we will be able to achieve full absorption of all benefits.

Cyprus is one of the frontline countries which are under strong pressure from the immigration and refugee crisis. But we guard part of the European Union's external borders. We have an obligation to our partners and we try to be effective.

The problem of illegal immigration is not a problem that only Cyprus is faced with. It is a problem of the entire EU.

On 24 September, EU Commissioner Ilva Johansson presented her proposals for a new single European Migration and Asylum Policy, which she hoped would address this complex issue.

The aim is the effective management and the fairer distribution of the burden of immigration by introducing mechanisms of real solidarity and strengthening the frontline countries that today bear a disproportionately large burden.

Cyprus has already clearly stated its support for the need for a unified policy.

The Pact on Migration is not ideal. It ensures, however, in the form of an obligation, that the Member States will provide support and solidarity to those countries which bear the burden, in various ways.

Our political position is that we all have to make concessions and agree on a balancing formula that will allow the rational reception of refugee migrants, the fight against and punishment of traffickers, the conclusion of agreements on returns with third countries at a central level, the organisation and maximization of such returns, as well as the adoption of proper methods of social inclusion and management of those who legally ensure their stay.

The Ministry of Interior of the Republic of Cyprus and I personally, consult with our partners in order to bring a successful conclusion to a key issue that has been plaguing the entire Europe, and beyond.

In this effort, we are asking from our big European family in which we belong to recognise the particularities of our country and the constant pressure we receive from occupying Turkey, which systematically promotes flows of mainly African and Syrian migrants through the occupied territories to the controlled from the Republic areas of our country.

With the hope that there will be a positive outcome to a single European Asylum and Migration Policy that will address this extremely serious issue with rationality and solidarity, I would like to thank all of you for your contribution and work and wish you all good work and even better results.

Wishing you all a very Merry Christmas and health above all.